“Ballers” is Better Than Nothing

I’ve been wishing someone (and not Aaron Sorkin) would bring back Sports Night for a while. There are even more cultural issues in sports, media, and the intersection to discuss than there were in the late 90s/early 2000s — or at least there seems to be an appetite for serious discussion of those issues.

Ballers, the new Dwayne Johnson show on HBO, is not that show, but it’s fun enough and just complicated enough that I’m interested. The New York Times article linked here explains that it tries to tackle some of the flip side issues of the exorbitant expenditures we associate with wealthy athletes. It also, in the first two episodes, tries to squeeze in some concerns about substance abuse and even — in what I think is its most interesting potential storyline — the identity issues that plague a person who’s been defined almost solely by physical accomplishment.

So I guess I’ll keep watching. I expect to be let down as this dissolves into an Entourage festival of low stakes and degraded women, but maybe they’ll get to some good stuff before then. Maybe?

That Detroit offers mass weddings every Friday in the summer at 3 p.m.:

The Wayne County clerk in downtown Detroit was ready for the decision with gender-neutral applications and affidavits. But so far, no one has arrived. If people want to marry here on Friday, they can take advantage of 3 p.m. mass ceremony that the clerk has, for years, offered to everyone in the summer.

That Joe Biden continues to be awesome: 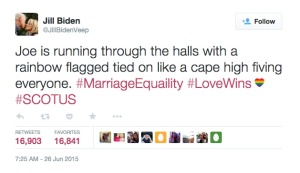 Skip Entourage, but read the reviews (for fun!)

In my case, it was the same way the people on screen got there: because someone paid me. Why anyone would run the transaction in reverse is puzzling enough to be worth pondering, and also too depressing to contemplate.

When is it time to resign?

I’m riveted by the drama in my own statehouse, where Governor John Kitzhaber seems to be considering (and reconsidering) whether to resign while allegations mount that his partner, Cylvia Hayes, traded on her position as First Lady for personal and professional gain. (Hayes and Kitzhaber both face media charges, as well, that she influenced state policy while being paid to support certain ideas/issues). I’m a fan of the governor’s, and I’m particularly interested to see that elected state Democrats seem sad about the situation. It tells you about their expectations for Kitzhaber’s fourth term: they expected more, and they seem to still feel that he has more to give. There’s also a sense that this is a terrible way to end a storied and worthy career. We mourn for not just what might have been but also what this scandal will do to what has been — devalue decades of public service.

I’m curious about this now because resignations, suspensions, and retirements are all over the news. Outside of Oregon, Brian Williams is finding himself without an anchor’s desk at NBC, and Jon Stewart has announced plans to leave “The Daily Show” later this year. How do you know when it’s time to move on?

In Williams’s case and Kitzhaber’s, it seems like that the decision to resign will not be entirely an individual choice. Kitzhaber will have to resign if he loses the confidence of the legislature (ok, technically, that’s not true, but practically, it might be), and if criminal charges seem likely against either Hayes or Kitzhaber, I can’t imagine he’ll stay at the state’s helm.

Williams, I suspect, will cling to his position, if not his actual job, for as long as possible. His suspension won’t preclude him from popping up on camera in the future. In fact, I won’t be surprised when we see Brian Williams, on-the-ground reporter, turning in strictly monitored, factually accurate pieces come October.

But would it be better if he quit? Will things be improved by Kitzhaber’s resignation? I don’t know. I doubt they know. There should be a guide or a checklist, something where you can select “criteria under which my career is effectively over,” that you sign before taking on a big position, like a Living Will for My Career. For most journalists, it seems that line is “I’ve become the story.” Williams, though, who has been an entertainment figure beyond his news-reading workday, has already blurred that line, so it’s hard to know what his criterion might be.

Most politicians who resign in disgrace include the idea that the surrounding scandal has become too much of a distraction to allow them to serve to their fullest abilities. I believe it’s absolutely possible that this is true, and I think it also rarely matters. In the short-term, sure, maybe your power is reduced by how little anyone wants to sit at your lunch table, but in the long-term, everyone still needs your vote or your signature to get things done. Plus, I believe that a person who rises to a position like Williams’s or Kitzhaber’s is probably a work-a-holic, someone who finds comfort and identity in the tasks and requirements. That’s a person (like Bill Clinton, for instance) who will be hyper-focused by scandal. There’s an argument to be made that these types of leaders perform better work when they’re under close scrutiny like this.

Can we make that argument about Kitzhaber? I don’t know, but I’m riveted.

I fell behind on writing about this, but I haven’t fallen behind in actually making quick breads. The winter break from school and some food donation boxes required me to try 4 new recipes, 2 of which came from this handout.

I made most of these in 5x8x3 pans and got four mini breads from each recipe.

This bread asks for 3/4 cup of applesauce and 1/4 cup of apple butter. However, what I had on hand was cups and cups of apple butter (and pear butter), so I just replaced the whole amount with apple butter or pear butter, and I cut out the pumpkin pie spice. It was great! The bread is sweet and the outside gets a little bit crunchy — not actually crunchy, but it has a sugar-caramelized darkness to it. The rum-soaked raisins are good, too, but if you’re a real raisin lover, either chop your raisins small to get some in each bite or double the raisins.

I made this twice with an unsweetened version of pear butter, and it was very good, so I don’t think having a sweet sauce to add is really necessary. You do still add a significant amount of sugar in the batter, so I think using a less-sugared apple or pear butter will make for a better bread.

This is also very good. That’s saying something; I think chocolate muffins in general are weak in the chocolate department, depending on chocolate chips to lend flavor. This bread does pretty well on its own (though the chocolate chips do help). The chocolate bread recipe overall is solid; the sour cream makes the bread moist and smoother than the other recipes, more cake-like. I don’t know what else to say about this other than we’d love to eat it almost all the time so I can never make it again. Ha!

This would be great for kids and great in muffins (assuming no one has a peanut allergy). The only peanut butter chips my store had were the Reese’s brand, so it really tasted candy-like. Oh! I forgot the peanuts on top, but they’d be a nice salty accompaniment if you like peanuts.

The other two breads I made came from my mother (her banana bread recipe is great) and the Kitchn, which has an excellent buttermilk quick bread recipe. Maybe I’ll post those as an interstitial before the next round of Food Network candidates.

But: Up next, Chocolate Stout Quick Bread!

I had to take something for an informal lunch-time potluck. I wanted to bake because I’d had a bad day. I also didn’t want to pile on to the sweet-overload I knew awaited us all at this meeting (because everyone in this department is having a bad day). So, I turned to my 50 Quick Breads booklet, and I found the savory savior: #45, Buffalo Quick Bread.

I admit, I saw bread that contained Buffalo Hot Sauce and I was skeptical. I shouldn’t have been. This bread is very tasty.

I made only one substitution: I used pepper jack cheese instead of plain jack cheese. That, I think, was a good call, but I’m sure regular jack would be just as good. I think the vinegary hot sauce changes the texture a little, and the bread tastes almost a little grainier than the usual quick bread. This could also be because it’s the color of cornbread.

Either way, definitely good. I would make this again.

Another note: the smoked paprika is VITAL here. Do not substitute regular stuff. Please. Please.

Having almost nothing to do with anything else that I usually write about, I was given (and enjoy) a Food magazine subscription two years ago. In every issue, there’s a little booklet that gives you 50 variations on some food or recipe. For instance, they’ve done 50 Burgers, 50 Potato Salads (a favorite), 50 popcorns, etc. This month, they had 50 Quick Breads.

Now, I like quick bread. It’s quick. It’s bread. It’s also, traditionally, either banana or pumpkin, with various mix-ins, at my house. So I was happy to see this little booklet, and I think it may be the one I finally use completely.

The first one I made, on pretty much the day I got the magazine, was Earl Grey Tea bread (No. 31). It’s a variation on their basic vanilla bread that uses strong Earl Grey as the main liquid and is supposed to have a tea-and-honey glaze. Sounds good, right?

This bread was… meh. My tea-and-honey glaze never set up, so it just soaked into the finished bread. I think I didn’t make my tea strong enough, either, as the flavor didn’t much come through. Next time, I’d try at least two tea bags/two teaspoons of tea per boiling cup, and I might brew the tea well in advance (I admit, I did it as part of the cooking process).