Today we went for breakfast at a diner we’d never tried before. The review for said diner promised “manhole cover-sized pancakes.” The group’s consensus (OK, mostly between R and I) was that this could not possibly be true, but that it did signal some larger-than-usual pancakes that should be checked out. (We value our pancakes).

So we trundled over the river to a tiny little diner decorated with old license plates and Elvis memorabilia to try out the pancakes of legend. The menu itself also promised that one wouldn’t need more than a single pancake to end hunger; there are no short stacks at Addi’s Diner. There’s just the one hotcake, for $3.25.

I ordered just this, figuring (correctly) I could also swipe some food from C’s plate if needed. R ordered a pancake, egg, bacon, and side of “pitiful lookin’ biscuit” with gravy (the restaurant’s words, not ours). C went with a Reuben burger and potato skins. 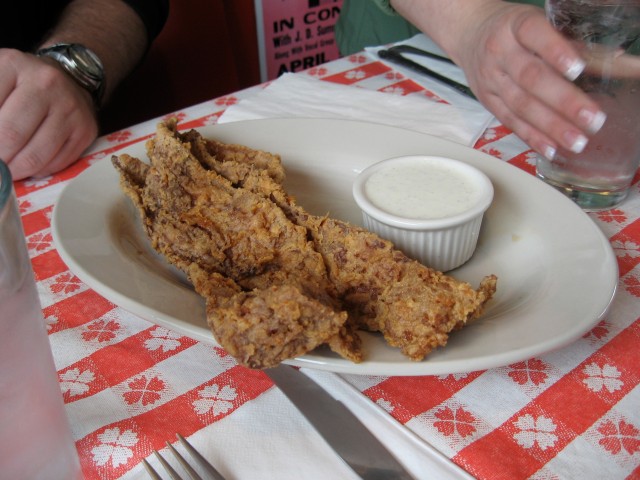 That, my friends, is an appetizer America should be talking about. Move over, please, KFC Double Down. This is a real gamble: crispy-battered, salty bacon, in strips so long they must have found extra stretchy pigs to make it. The guys both admitted there was probably some permanent heart damage being done — but they said this while dipping the strips in the included ranch dressing, to cut the salt. Despite groaning and prediction of apocalypse, the bacon appetizer was one of only two plates that were completely cleaned by the end of the meal.

The bacon was followed by delivery of the pancakes. On platters. That they over-filled. “I’ll just move over so there’s room for your pancake,” C said, with — I believe — a bit of awe.

The hotcake — I’m told there is a difference between “pancakes” and “hotcakes” and “flapjacks,” but haven’t yet researched this — was gigantic and dense. No amount of syrup (which came, warmed, in a glass bottle) seemed like enough — maybe because the pancakes came with what must have been a quarter-cup of whipped butter melting on top. 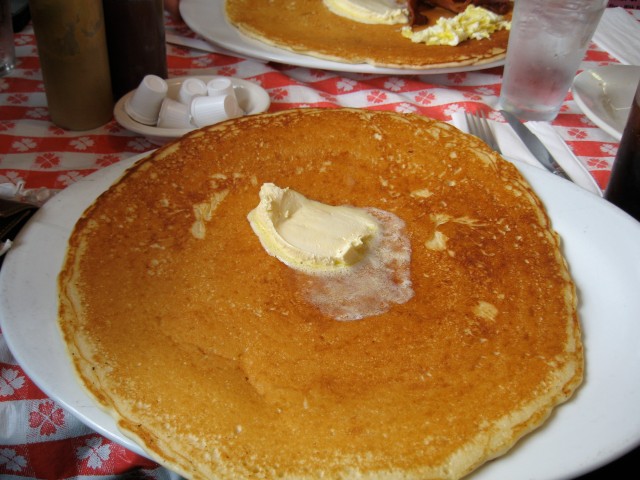 I made it through maybe a third before I could do no more. R’s pitiful biscuit (it actually looked quite good) with gravy was only half-eaten, too, despite good flavored cream-sausage gravy. C managed to finish his Reuben burger, but I was left to devour his potato skins (which were really just that: skins, fried to crispy with only a faint juicy film of potato flesh still clinging to the curves).

This was a delightful, if punishing meal, and we all ate for about $8 each with refillable sodas. If we’d gone for coffee — $.75 — it would’ve been even less.

As we watched our leftovers get carried away, R asked, “Why don’t we believe what we read?” We had, after all, been warned about the size of the pancakes.

We decided it was a combination of factors: the unlikelihood of the pancakes being that large; the opposite likelihood of people exaggerating in positive reviews; and our general consideration of our own appetites as extraordinary.

Sometimes, you just have to see things for yourself. We’re all believers, now — at least, I believe we’ll go back pretty soon.

This entry was posted in food, i endorse. Bookmark the permalink.